UZINZO: CHANGING THE LANDSCAPE OF SUGARCANE FARMING IN KZN

As agri-processing giant Tongaat Hulett exits sugar farming, sweet success is being tasted by previously disadvantaged individuals who are taking the gap. 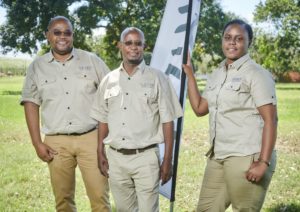 A strategic review and turnaround process currently underway within Tongaat Hulett has identified the opportunity for the company to exit its direct sugarcane farming activities in South Africa.

To meet these aspirations, Tongaat Hulett has established FarmCo, a transformation initiative to ensure that land which has been targeted for future property development remains productive under sugarcane. Numerous farms will transition through creating opportunities for third party growers to farm company owned land thereby mitigating potential job losses at the farm level.

Phase 1 of FarmCo is set to meet the Agri-BEE scorecard objectives including equity and ownership profiles, through the creation of a large-scale black-owned sugarcane farming enterprise. The initiative will also reduce the impact of retrenchment through employee empowerment; focus only on the estates that have the highest agronomic potential; and maintain full economies of size and scale of estates. In addition, FarmCo is set to encourage youth participation and ensure meaningful participation of black farmers within the sugar industry.

To make the transformation initiative a reality, Tongaat Hulett facilitated the creation of Uzinzo Sugar Farming, which means stability in isiZulu. Uzinzo will enable shareholders to lease three prime agricultural estates at below market-related rental. The leased area is approximately 3 900 hectares with an estimated annual production of 160 000 tons of sugarcane, making Uzinzo Sugar Farming one of Tongaat Hulett’s top five largest supplying growers.

The three farms extend over both coastal and the Midlands regions, mitigating climate risks. They also grow different variants of cane, some of which are harvested annually and other crops every second year. Farming will also include food crops.

Uzinzo’s annual revenue is expected to be around R79 million, which together with its scale of production, will make it the first broad-based agricultural company to feature amongst the largest 10 sugarcane farmers in KwaZulu-Natal.

Three dynamic individuals, Nonhlanhla Gumede (33), Khetha Ncalane (45) and Khumbulani Mthethwa (44) have been selected to be at the helm of Uzinzo Sugar Farming. These individuals have a 65% shareholding. There is also a 15% shareholding for the employees through an Employee Trust that has been created. Tongaat Hulett, which will retain a 20% shareholding, will play a facilitative and mentorship role in the short-term while the shareholders familiarise themselves with the various intricacies of this sugar farming business.

Nonhlanhla has a nine-year experience within the agricultural sector. She spent a short period at the start of her career within the banking sector. In 2011 she joined her father in the management of a 90.3-hectare farm. The six-years’ experience on her father’s farm motivated her to buy her own farm, which she did in 2017. Nonhlanhla’s 170-hectare farm has the potential to produce 3 300 tons of sugarcane. She has diversified her business to also grow, supply and distribute fresh produce to schools as part of the Ilembe Enterprise development programme, which has enabled her to employ more labour on her farm.

“Uzinzo will allow me to grow and learn from my colleagues who have considerable experience in farming. It will also encourage young women to see the future in agriculture.”

Nonhlanhla also believes that the sugar industry plays an important role in assisting government to deal with the challenge of unemployment.

Khetha Ncalane, another shareholder within Uzinzo Sugar Farming, has a long history with Tongaat Hulett. He was first introduced to Tongaat Hulett when his father was employed as a general worker. Many years later, Ncalane joined Tongaat Hulett himself and has worked as a trainee; an estate supervisor and manager in many Tongaat Hulett Estates including Wewe, Hillhead and Dube Ridge.

In 2003, Ncalane established his own company, called Emkay. In its first year of operation Emkay harvested 45 000 tons of sugarcane. The business has grown over the past 16 years and he now harvests between 200 000 – 250 000 tons of sugarcane in his various operations. He also provides a wide range of agricultural services to small-scale and land reform growers. As a true operator, Ncalane said that based on the current projections, the three estates have the potential to produce 160 000 tons. However, Ncalane believes that Uzinzo will in fact be able to produce between 180 000 and 190 000 tons.

“I’m honoured to be part of Uzinzo Sugar Farming,” said Ncalane. “Uzinzo is responding to the government’s transformation agenda as 65% of the company is black-owned.”

He also believes that his other business partners were well equipped to make Uzinzo a success.

Khumbulani Mthethwa, the third shareholder, was born in Ndulinde under Inkosi Mhlongo. This traditional leadership area forms part of the Ilembe district municipality. Mthethwa knew from an early age that he wanted to be part of the agricultural sector. This passion propelled him to purchase a 271-hectare farm in 2011 which is annually producing 10 000 tons of sugarcane. In 2018, he bought his second farm which is 120 hectares and has the potential to produce 5 000 tons. In addition, Mthethwa is one of the largest harvesting contractors within the sugar industry. He is currently harvesting 270 000 tons of sugarcane for small-scale growers in communal areas.

As part of his commitment to poverty alleviation and food security, Mthethwa has established a five-hectare vegetable block in Ndulinde. He supplies Enterprise Ilembe with his produce monthly. He has also applied through the Department of Economic Development, Tourism and Environmental Affairs to be part of the Radical Agrarian Socio-Economic Transformation (RASET) programme. Through RASET, he will also be one of the service providers producing vegetables for the surrounding schools and hospitals.

“I have been humbled by the trust bestowed to Uzinzo by Tongaat Hulett,” said Mthethwa. “There was no room for failure. We will work in partnership with government to address issues of unemployment, youth and rural development.”